How to make video tutorial with Camtasia Studio. The tutorial shows you how to record the screen and produce the video.

As first step select „Record the screen” option and select the area which is supposed to be recorded. After area has been chosen, select from options, which way you want the audio to be added. Either from mic in LIVE while recording the video or if not at the same time, then you can add voice after filming part is done. If wanted then from „Effects” you can select if cursor is seen while recording. 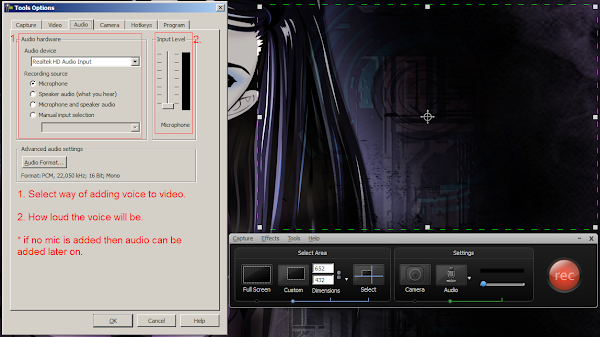 After first part is done and videos are saved, it is time to cut and edit them together for being fit for the complete video. Now start new project and drag video files on timeline „Video 1” part and select the type of video it shall be produced as (e.g. YouTube). On timeline you can add video after video, which you wanted to be in your video tutorial. If there is unnecessary parts in it, select the certain area and right-click + „Cut selection”. Repteat this step until the video has all important in and not useful parts out of it. 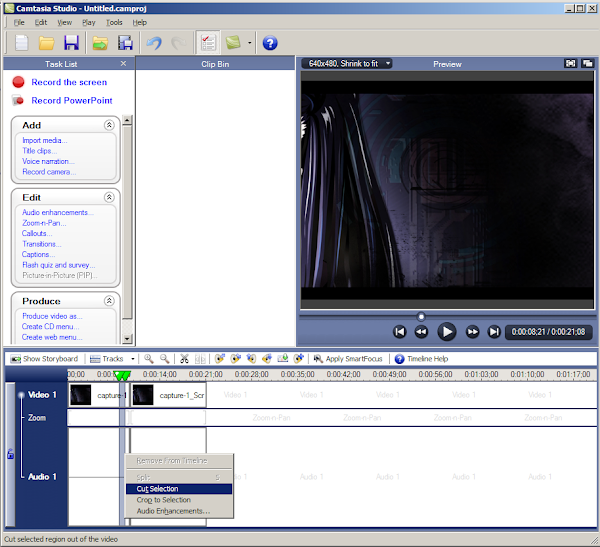 If you feel like video tutorial does need captions, zooming, slower frames, then Camtasia Studio does provide applications to do them. All you have to do is select the area of clips which needs to be wither zoomed or slowed and after selecting it, choose „Zoom-n-Pan Properties.” With zooming you can select the certain area which needs to be zoomed in. And if everything is selected then click „Finished” in upper right corner. 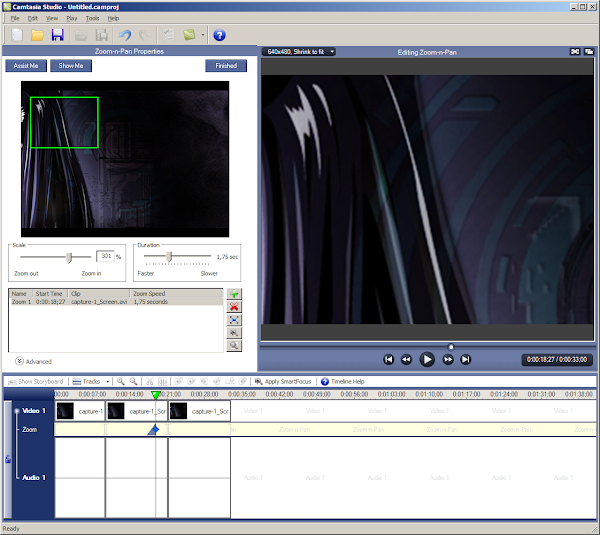 If you don’t feel like adding voice while you make video tutorial, Camtasia Studio has application for adding captions. Open the „Captions” from left sided menu and select the type for captions to be seen on video. Either „Overlay” or „Display” one for text being on video and second for being under video, on black. Now select the part of video which is supposed to have the certain text on and type the sentence, instructions or what so ever which your video tutorial must have there. For next caption hit „Add” and type another one as you please. For making text bigger or smaller, in the right corner of the app number of chars on line chan be chosen. More chars per line, the smaller the text appears. And when all is satisfying hit „Finished” in right top corner of app. 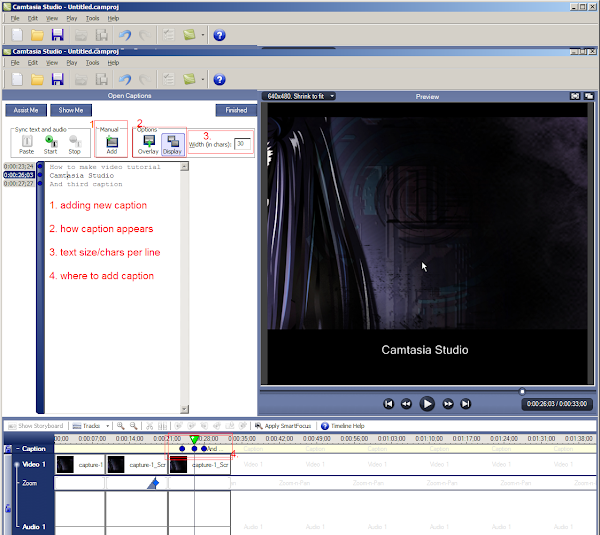 If you want to point out something in your video tutorial, it is easy to do that with „Callout” option. Select it from left side menu, hit the plus button and select the type of callout you want to use for highlighting the certain part. It has options for size, color and rotation, which can be selected from application panel and from the video’s preview window. You can drag it bigger and smaller or switch its position on preview window. To select the time of callout being seen on video tutorial, it can be dragged longer and shorter on timeline. And for finishing hit „Finished”. 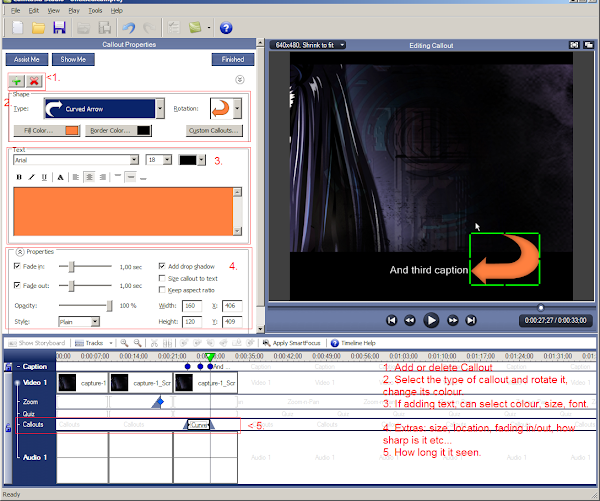 Feeling that clips shouldn’t just appear one after another, you can add transitions. Camtasia Studio provides many of them, probably for all tastes as well. Select the „Transitions” option from left side menu and then wide selection of transitions appear. Double clicking on them from selection shows what it looks like in demo. If the one has been found, then drag it on arrow between clips. When the ones have been selected, hit „Finished”. 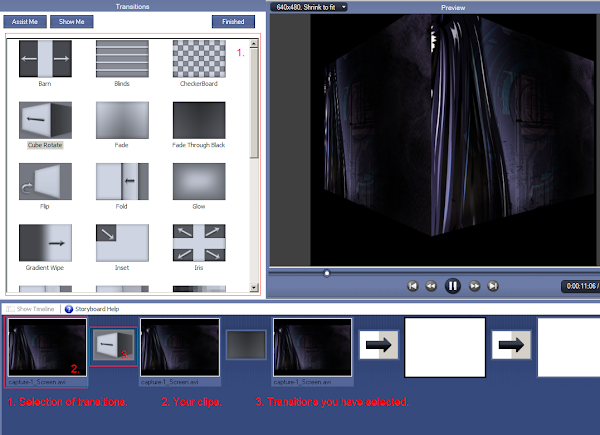 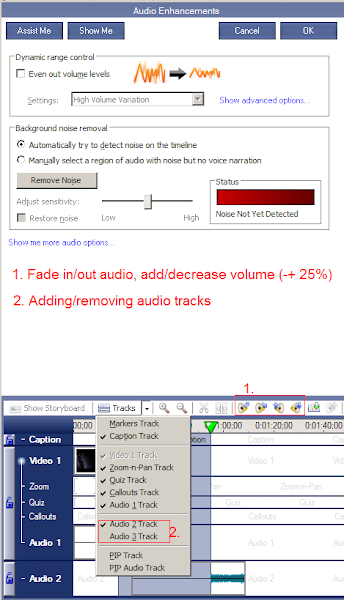 After all editing is done with video it’s time to add voice. Voice can be guiding and on topic with video or just background music, it is all upto the person who is making the video tutorial. If there was no voice already recorded while filming clips you can add it now. For this any program can be used which records voice coming from microphone. Easier is to write script or notes and put video rolling and mic recording so you can see at same time how far the video is and which parts must be talked or explaned about. Talk your text in it and save the audio recording. After recording audio, add it to you video in Camtasia, with draging the voice file on audio part in timeline. Above the timeline are buttons and options, hit „Tracks” and tick „Audio 2” so another timeline for audio is added. You can drag the voice clip on it. Audio can be cut and moved as video section, so if corrections are necessary then they can be easily done for your video tutorial. Loudness can be controlled with buttons above the time line, also fading in-out and if there is something about audio which doesn’t want to be heard at all, then Edit->Audio->Replace With Silence. In the end, with „Audio Enhancements” the „noise” can be removed from audio, but that’s usually not very necessary.

Finish and produce your video tutorial:

Now as all parts have been done and video tutorial is ready to be produced. As first, save your project, in case something bad happens it is better to prevent everything bad from happening and losing all your work. After the project has been saved once again choose: File->Produce Video As. There appears selection of ways it will be produced (e.g. YouTube), it also shows you the format of video. This might hel you to decide how you want it to be produced, some formats take more space, some less. After right one has been chosen name your video and find the right place for it to be saved. Produce video and congratulations you have made a video tutorial with Camtasia Studio. 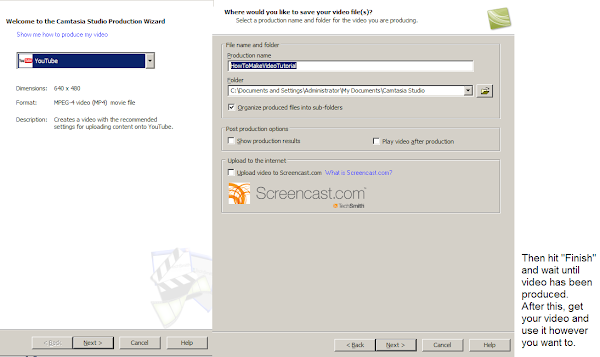